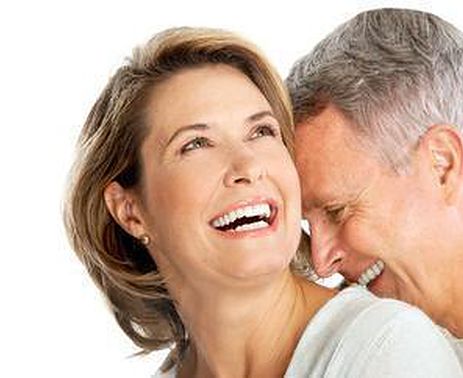 You may have asked yourself, “If I feel so good, why should I look so old?” and indeed, you don’t have to! If you are showing signs of facial aging, or appear prematurely aged, your appearance can be predictably turned back 20 years with the deep-plane facelift. You can look like a younger version of yourself without any of the stretched, tell-tale signs of having had a facelift.

With a well-performed operation, using the most advanced techniques, we are able to provide you a facelift that few can compare to in terms of results.  The Fairbanks Facelift has withstood the test of time.

If you are considering facial rejuvenation, you should research your options. Facelift procedures vary, and so do the results. Beware of the clever catch-phrase quickie lifts (e.g. “smart-lift,” “lifestyle-lift,” “quickilift,” “lunch-hour-lift,” “S-lift,” “quick-lift,” “mini-lift,” “string-lift,” etc.) These are ALL mini-lifts. Despite the fact that they are heavily promoted, these are outdated and inadequate procedures. They were performed in the 1920s and 1930s. The results are both limited and disappointing. They are generally performed today by practitioners of limited training. The science of facial rejuvenation has come a long way since the 1920s, so don’t settle for hundred-year-old technology when it comes to your health and appearance. At Fairbanks Plastic Surgery, you can expect to achieve optimal results with state of the art science utilizing the deep plane approach into the anatomic release zone.

A common question about facelifts is “how long will it last?” The simple answer is, “The younger you go, the longer it will last.” A diagram on facelift longevity serves to answer this question more completely. 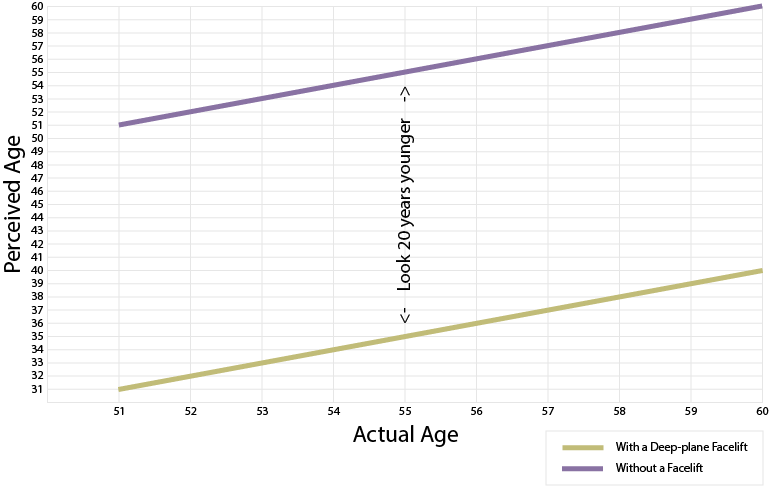 We look our best between the ages of 18 and 35. There is a time in which the aging process becomes apparent.  Not everyone ages at the same rate. Some people may have premature aging and these people are special candidates for facelift surgery.

The upward incline line on the graph represents the aging process.  The most common age for a facelift is 52 years.  If one undergoes a minimal or limited facelift, the results are generally disappointing and the patient soon looks like they did before surgery.

If a patient undergoes a properly performed deep-plane facelift into the anatomical release zone, the results are the maximum possible reversal of aging without looking tight, stretched, or strange. The goal is to go back to our optimal appearance or as close to it as possible. Remember, however, that aging continues and there will come a time when we once again look similar to how we looked at the time of our original facelift.  However, we will continue to look much younger than our actual age; usually around 20 years younger.

Facial rejuvenation surgery should not be confused with facial resurfacing procedures, such as laser, chemical peel, or dermabrasion. Facial resurfacing refers to skin surface destruction, which then heals on the surface only. While beneficial in certain cases, you cannot expect to attain anything comparable to the rejuvenation and youthful appearance to be had through a medically advanced and well-performed facelift operation. Resurfacing procedures also take longer to heal and have more down-time.

The most important things to avoid when considering a facelift procedure are the tell-tale signs of having had a facelift; the so-called “facelift stigmata.”  Only a natural-looking, younger appearance should be acceptable to you. Inferior facelift procedures can result in the loss of sideburns, all scars, hair loss, unsightly stitch or staple marks, and even ear deformities. These undesirable results can all be avoided. At Fairbanks Plastic Surgery, we have been able to avoid these unsightly features. Our perfected, medically advanced procedure will give you the youthful appearance you want without looking tight, stretched, or strange. We also employ special techniques to minimize bruising and swelling. Patients can generally plan to resume public appearances in 12 – 14 days.

If you have been considering cosmetic surgery to achieve a more youthful appearance, be sure to call us. One of our plastic surgeons will be happy to explain the principles of the Fairbanks Deep Plane Facelift and the advanced techniques we have been able to achieve on the basis of facial anatomy. Your surgeon will answer your questions and show you examples of our excellent results.

Unlike many other types of facelifts, our facelift is predictable. It achieves a maximum of rejuvenation or youthfulness. It is longer lasting. The stigmata of a person having obviously undergone a facelift can ALL be avoided. The deep-plane facelift into the anatomic release zone is the gold standard against which all other facelift procedures must be compared.  If you have undergone a lesser facelift elsewhere, and are dissatisfied with the results, we may be able to help you.  Please call the office and come in for an evaluation.

Question: How much pain can I expect after surgery?
Answer: Postoperative pain is usually minimal.  It decreases every day and after three days you should be pain free.

Question: Will other people be able to tell I’ve had a facelift?
Answer: Doubtful.  Unless they have a photographic memory, they won’t be able to tell.  You’ll simply look like a younger version of yourself.

Be sure to watch the video above on facial rejuvenation. This video includes patient testimonials.

Facelift Before and After 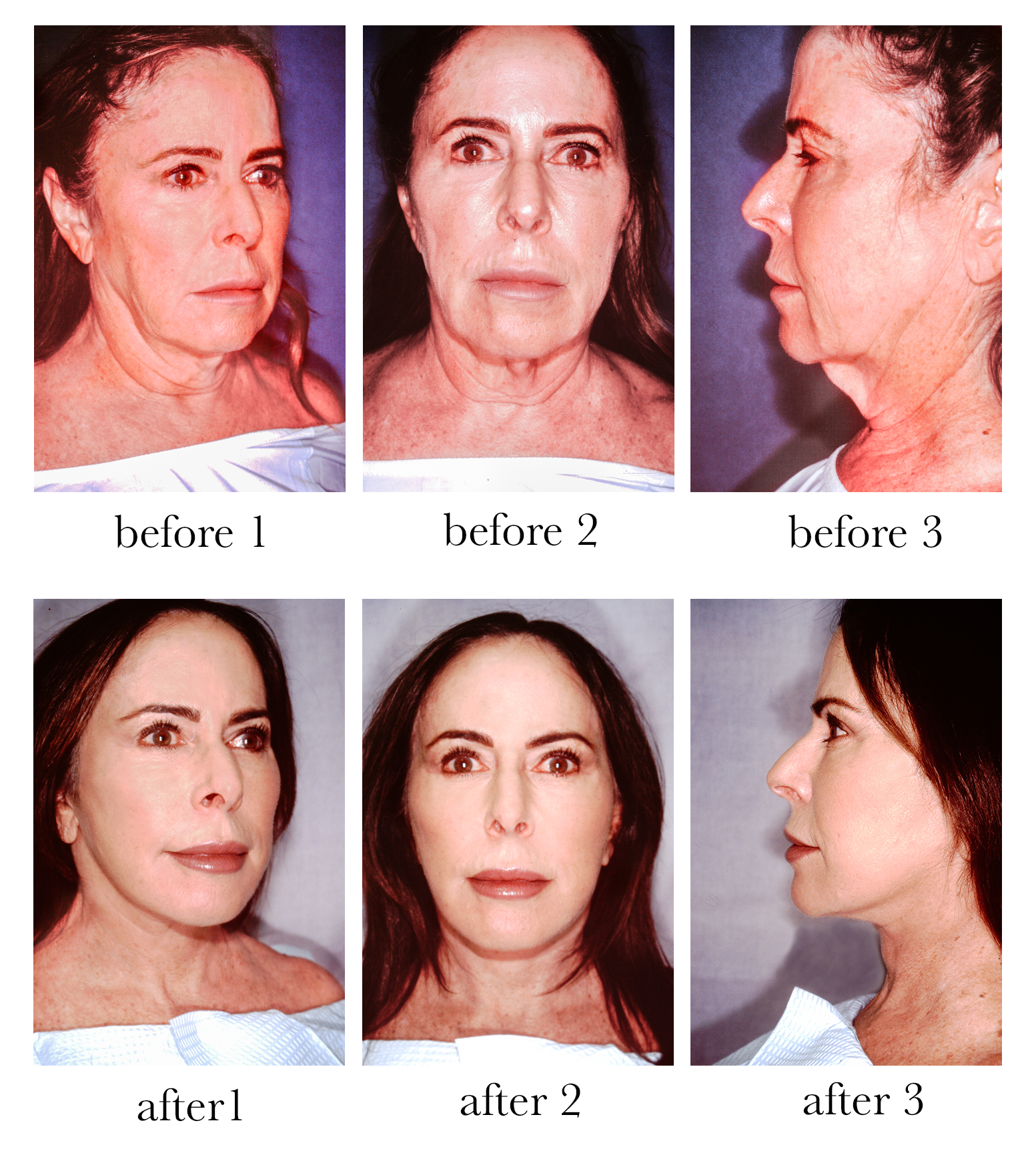 Male Facial Rejuvenation Before and After 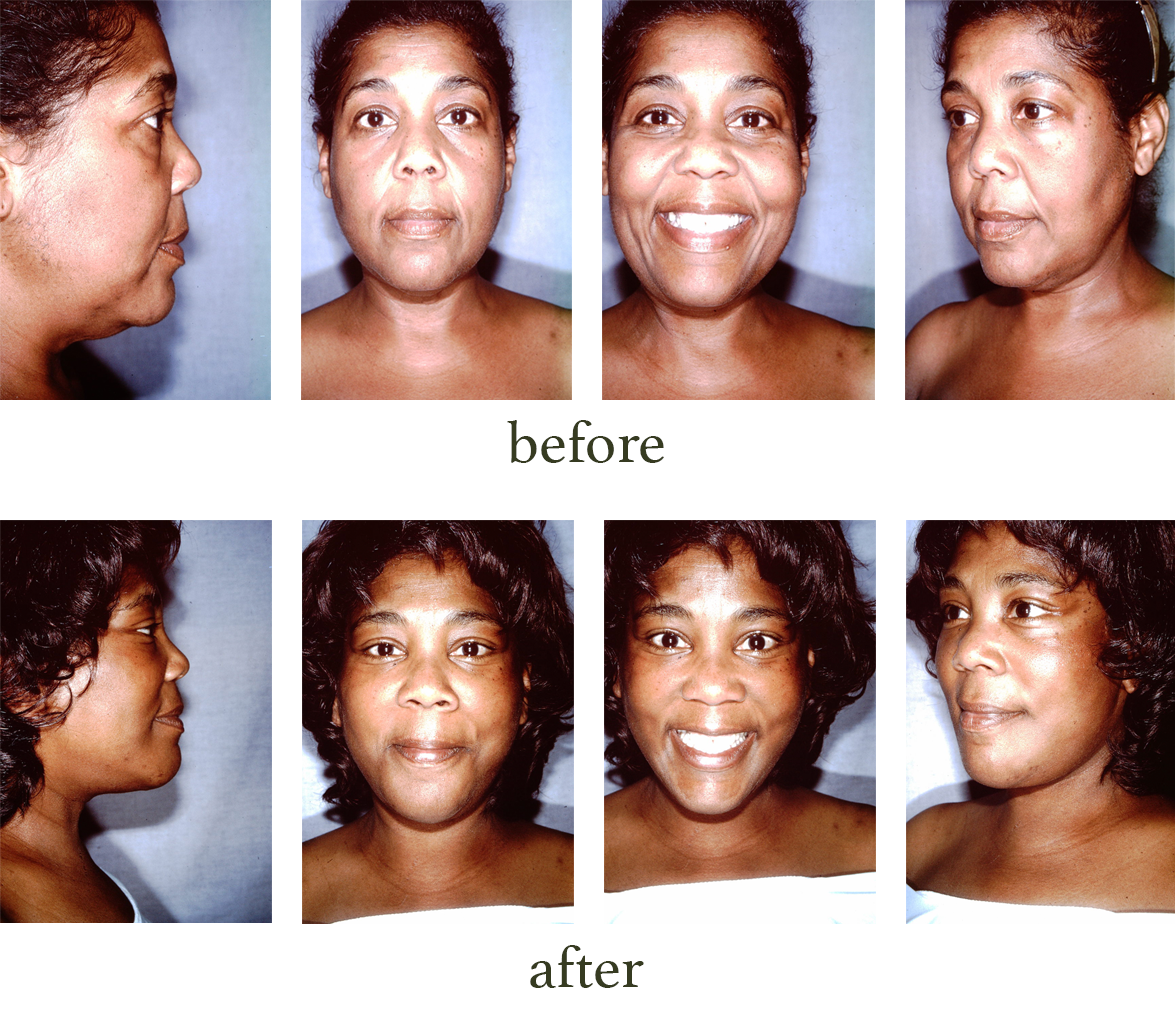 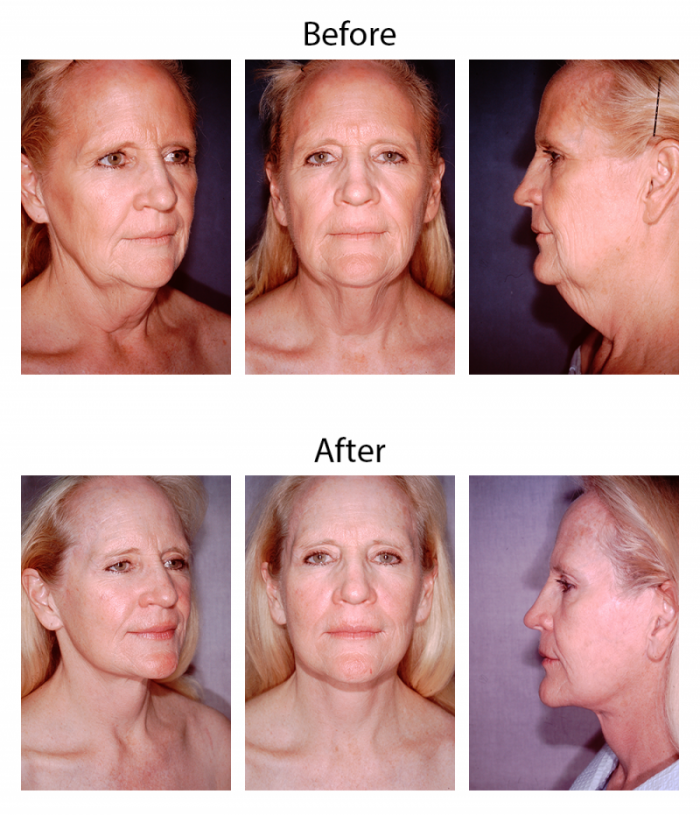